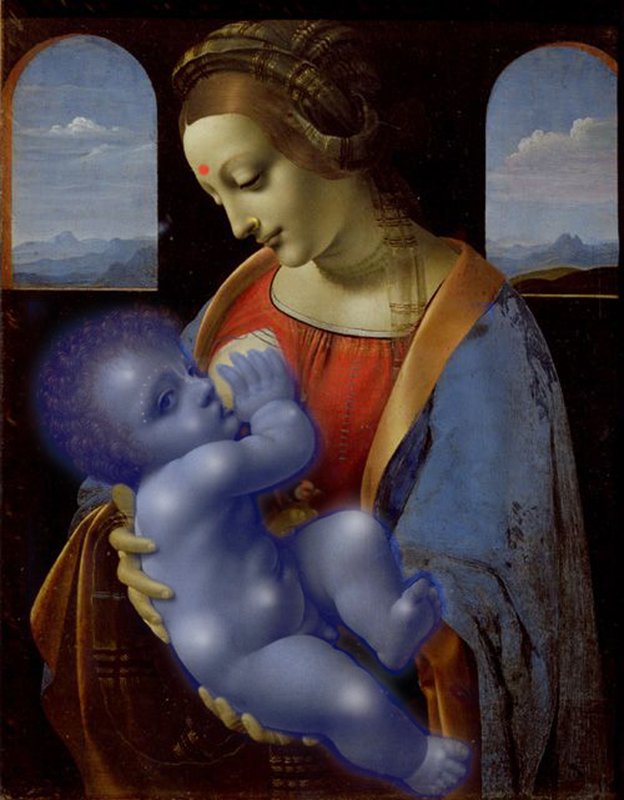 The Cultural Warfare of the Divine Form, is a subset narrative deep in deconstruction of worldviews where few manage to gain the consciousness to unlock. Here the game plays out with the portrayal of the pastime of krishna sucking the breast milk of the witch Putana. It is an intense form of cultural appropriation and reverse colonialism, using the classic icon of the Madonna and Child by Leonardo Da Vinci, where the child is transformed into Śrī Krishna and establishing the personality of Madonna as Putana

tāḿ tīkṣṇa-cittām ativāma-ceṣṭitāḿvīkṣyāntarā koṣa-paricchadāsivatvara-striyaḿ tat-prabhayā ca dharṣitenirīkṣyamāṇe jananī hy atiṣṭhatām Pūtanā Rākṣasī‘s heart was fierce and cruel, but she looked like a very affectionate mother. Thus she resembled a sharp sword in a soft sheath. Although seeing her within the room, Yaśodā and Rohiṇī, overwhelmed by her beauty, did not stop her, but remained silent because she treated the child like a mother.

The deeper conceptual ideas behind this image is from an article in the Śrī Krishna Saṁhitā where Śrīla, Bhaktivinoda Ṭhākur explains significance of the personality of Putana.

Putana is the slayer of all infants. The baby, when he or she comes out of the mother’s womb, falls at once into the clutches of the pseudo-teachers of religion. These teacher are successful in  forestalling the attempts of the good preceptor whose help is never sought by the atheists of this  world at the baptisms of their children. This is ensured by the arrangements of all the established  churches of the world. They have been successful only in supplying watchful Putanas for effecting the spiritual destruction of persons from the moment of their birth with the cooperation of  their worldly parents. No human contrivance can prevent these Putanas from obtaining possession of the pulpits. This is due to the general prevalence of atheistic disposition in the people of  this world. The church that has the best chance of survival in this damned world is that of atheism under the convenient guise of theism. The churches have always proved the staunchest upholders of the grossest forms of worldliness from which even the worst of non-ecclesiastical  criminals are found to recoil. It is not from any deliberate opposition to the ordained clergy that these observations are made.  The original purpose of the established churches of the world may not be always objectionable.  But no stable religious arrangement for instructing the masses has yet been successful. The supreme Lord Shree Krishna Chaitanya in pursuance of the teaching of the scriptures enjoins all  absence of conventionalism for the teachers of the eternal religion. It does not follow that the  mechanical adoption of the unconventional life by any person will make him a ﬁt teacher of religion. Regulation is necessary for controlling the inherent worldliness of conditioned souls. But  no mechanical regulation has any value even for such a purpose. The bonaﬁde teacher of the religion is neither any product nor the favorer of any mechanical system. In his hands no system  has likewise the chance of degenerating into a lifeless arrangement. The mere pursuit of ﬁxed  doctrines and ﬁxed liturgies cannot hold a person to the true spirit of doctrine or liturgy. Those are, therefore, greatly mistaken who are disposed to look forward to the amelioration of  the worldly state in any worldly sense from the worldly success of any really spiritual movement.  It is these worldly expectants who become the patrons of the mischievous race of the pseudo- teachers of religion, the Putanas, whose congenial function is to stiﬂe the theistic disposition at  the very moment of its suspected appearance. But the real theistic disposition can never be stiﬂed  even by the efforts of those Putanas. The Putanas have power only over the atheists. It is a thankless but salutary task which they perform for the beneﬁt of their willing victims. The idea of an organized church in an intelligible form, indeed, marks the close of the living  spiritual movement. The great ecclesiastical establishments are the dykes and the dams to retain  the current that cannot be held by any such contrivances. They, indeed, indicate a desire on the  part of the masses to exploit a spiritual movement for their own purpose. They also unmistakably  indicate the end of the absolute and unconventional guidance of the bonaﬁde spiritual teacher. The people of this world understand preventive systems, they can have no idea of the unprevented positive eternal life. Neither can there be any earthly contrivance for the permanent preservation of the life eternal on this mundane plane on the popular scale. But as soon as the theistic disposition proper makes its appearance in the pure cognitive essence  of the awakened soul the Putanas are decisively silenced at the very earliest stage of their en counter with New-born Krishna. The would-be slayer is herself slain. This is the reward of the  negative services that the Putanas unwittingly render to the cause of theism by strangling all  hypocritical demonstrations against their own hypocrisy. But Putana does not at all like to receive her reward in the only form which involves the total destruction of her wrong personality.  King Kansa also does not like to lose the service of the most trusted of his agents. The effective  silencing of the whole race of the pseudo-teachers of religion is the very ﬁrst clear indication of  the Appearance of the Absolute on the mundane plane. The bonaﬁde teacher of the Absolute heralds the Advent of Krishna by his uncompromising campaign against the pseudo-teachers of religion.

Reading this article had a significant affect upon me, and I am still grasping to understand it’s full implications in the historical development of theistic and conceptual culture. 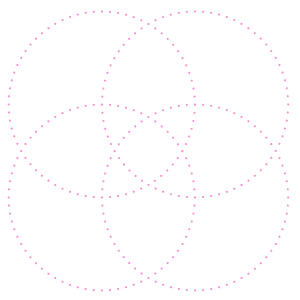